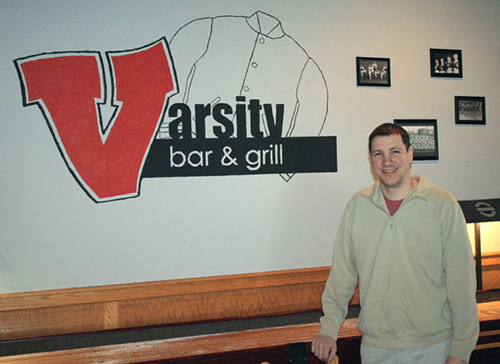 Wow!  Since the start in December or 2013, we have been enjoying your visits at the best neighborhood bar and grill in Sun Prairie.  Over the years we have made a lot of changes to the building and business while maintaining our high quality food and service.  We have added a patio, replaced the bar top, removed the carpet and installed new floors, lost the DJ booth, replaced the roof, fixed the siding, added new T.V.’s and updated kitchen equipment.  The fun never stops during Badger games with the UW Alumni Band members coming to entertain us which makes it the most enjoyable place to watch a game.  With 3 projector screens and our 14 other tv’s throughout the restaurant, you always have a view of biggest games.  Enjoy a seat at the large octagon bar where you have great views of everything happening.

Weekly events of: Ladies night Monday’s where we watch the Bachelor or Bachelorette,  Wednesday Trivia at 7, Weekly Raffle Thursday at 7, Friday Fish Fry from 10 am – 10 pm.  Come and have some fun every day and night with our amazing staff who treat you like family.

Reprinted from The Star

On Dec. 17, the transformation of the former Cardinal’s Nest became complete when Varsity opened for business at 1205 W. Main.

Gone is the dilapidated upholstery on the chairs — as is the large scoreboard at the back of the bar.

“My wife spent the time to reupholster all the tall chairs so they look nice,” remarked Anthony Steinhauer, owner of the new establishment. A fresh coat of paint gives Varsity a unified look — along with a new logo and some classic yearbook photos on the wall above the new shuffleboard table.

The name Varsity comes from two different areas. “I graduated from UW, so the singing of “Varsity” after every sporting event . . . it means something to me. But it also ties into the community with varsity sports — varsity sports throughout the high school,” Steinhauer explained. “When we were kicking around names, that name stuck. I really fell in love with Varsity.”

Describing the menu as traditional bar and grill pub food, Steinhauer’s top burger is the Varsity burger — a six ounce burger with Pepper Jack cheese, bacon , deep fried onions that are hand battered, on a pretzel bun with a special Varsity Sauce.

“We’re trying to do a small menu — and do it really well,” Steinhauer explained. “I’ve been told that we have one of the best burger in town — and that’s not just from me tootin’ my own horn.”

All burgers include a special sauce before it is cooked. “It doesn’t add any spice — just flavor. It’s very subtle and adds to the flavor and juiciness of the burger,” Steinhauer said.

Local folks might know Steinhauer from his previous stint as general manager of the Echo Tap in downtown Madison. “That’s where I gained the majority of my bar experience,” Steinhauer said. “I’ve been in the restaurant business since I was 18, off and on, just learning customer service.

“I also learned customer service — I used to work at Zimbrick for seven years in their service department when I was in high school and college,” Steinhauer said, adding that he is a licensed teacher, volleyball coach, and that he even worked at a travel agency before he finished college.

Steinhauer also related the story of how Varsity came to be.

“It was kind of on a whim,” Steinhauer recalled. “Everything was going great (at the Echo Tap), and all of a sudden, this opportunity presented itself to me to be my own owner and my wife was completely on board with it. We plugged some numbers in together and jumped all over it — the chance to revitalize this place.

“I came out a couple of times before [we purchase it] and it had great bones and great potential,” Steinhauer said.

“And I knew that when it was Champ’s it did well for a while and I think having the right person in here to revitalize it . . . to make things simpler and just going back to the simple ways of doing a great burger and great food to start with everything else will follow.”

One thing that won’t happen at Varsity: A closed kitchen before midnight. He said experiences with some restaurants whose kitchens close before 11 p.m. left a bad taste in this mouth — and to run his own place where the kitchen stays open later.

Besides lunch and homemade soup every day, Varsity features happy hour from 4-7 every day of the week, with drink specials each day.

So far, he said he has had one person ask about sponsoring a volleyball team but that he hasn’t seen any information about it yet.

A gaming company Steinhauer contracts with is aiming (no pun intended) to start some dart leagues at Varsity.

“We have a full 18-foot shuffleboard table in here that has been a huge success so far,” Steinhauer said. “People have been gravitating more towards that instead of pool, which is kind of funny.”

League Trivia Wisconsin will start at Varsity on Thursday, Jan. 23.

Varsity will host a themed event night once a month — such as a Hawaiian Night, a Wedding Reception Night or a Roaring 20s night, for example.

“I would have a set amount where you could get, like, all you can drink for $30 and cocktails tailored to that [theme],” Steinhauer said. “And then I would also rent a shuttle bus to take people home safely for that night — just like when you go to a wedding reception . . . because I want to make sure everyone is safe when they come in here and do that.”

Another idea is to do a family event or Bible trivia once per month on Sunday afternoons after the Super Bowl is completed. Why? “To give families the opportunity to do something together in town. We’re thinking about starting that at some point in February,” Steinhauer explained. “We’re still in the works of discussing that with League Trivia Wisconsin to figure out all the details of that.”

When asked to give an “elevator pitch” on why people should give Varsity a try, Steinhauer pointed out the amount of money spent to clean up the place and to make it more safe as well as to create a simple menu with a great burger.

“We don’t have an entertainment license – we aren’t doing deejays, we aren’t doing bands. I know that might hurt me at first, but it’s something where I want to clean everything up first . . . but it’s really the food.

“It starts with the food and the service. I’ve been extremely ecstatic with every staffer I’ve hired.”

Open 7 days a week from
10 am – 12 am.
Holiday hours may vary please contact for updated hours or closures.